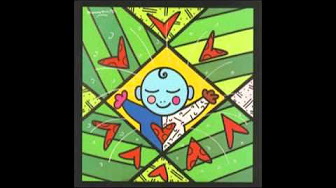 Brazilian President Dilma Rousseff and Health Minister Alexandre Padilha invited artist Romero Britto to join them in launching the Rede Cegonha, or Stork Network, program in Belo Horizonte, Brazil, at the Palacio das Artes on Monday, March 28th. The project has a budget of 9.4 billion Reais through 2014 reaching at least 61 million Brazilians. Britto created 10 stunning original pieces as well as the programs logo at the request of President Rousseff, creating a storyline celebrating the joy of pregnancy to the birth and growth of a healthy child in a loving and nurturing environment, and donated these 10 pieces, a total of $800,000 USD, to Rede Cegonha. President Rousseff commented on the logo created by Britto: “…the baby has one black leg, one white, showing the diversity of the Brazilian people, aside from [Britto’s] diaper and the stork, which are very Brazilian!” after personally opening an exhibition of the 10 works at the Palacio das Artes. The exhibition will next travel to Brasilia, where they’ll remain in the permanent collection of the Presidential Palace.

Rede Cegonha has already begun work on a network of primary care for women and children via the Sistema Unico de Saude (SUS), and is being coordinated by the Health Ministry and executed nationally by state and municipal governments of affected areas. The program will guide pregnant mothers through the confirmation of pregnancy, to pre-natal care, birth, and post-natal care, up until the child reaches two years of age in the hopes of securing a healthy and prosperous future for Brazil. Rede Cegonha will also address the qualifications of medical professionals treating the countries mothers and babies. Efforts will be prioritized in the Amazon and Northeast regions of the country, which have the highest instances of infant mortality, complications and death due to pregnancy, as well as nine large metropolitan regions with a very high concentration of pregnancies – Manaus, Recife, the Federal District, Belo Horizonte, Rio de Janeiro, Campinas, Curitiba, Porto Alegre and Sao Paulo.